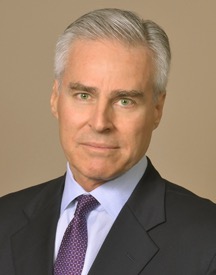 Mr. Carlson was born in Hibbing, Minnesota, in 1952. He attended Junior and Senior High School in the Cleveland suburb of Rocky River, Ohio. Mr. Carlson graduated from Purdue University with a Bachelor of Science degree in Mechanical Engineering in 1974. He graduated from the University of Miami School of Law in 1977.

Upon graduation from law school, Mr. Carlson joined the Miami law firm of Fowler, White & Burnett, P.A. in its Commercial Litigation Department, where he specialized in securities litigation. He worked at Fowler White for 14 years, eventually becoming a Managing Director of the firm, and represented and tried cases for many major brokerage firms, including:

He also represented the State of Ohio in the ESM Securities matter.

In 1991, Mr. Carlson left Fowler White to start his own law firm, which today is known as Carlson & Associates, P.A. Since 1991, Mr. Carlson has continued to focus his practice in the areas of securities litigation, principally in the area of representing customers and brokers in claims against brokerage firms, legal and accounting malpractice, director and officer liability, intellectual property claims, and corporate and partnership disputes.